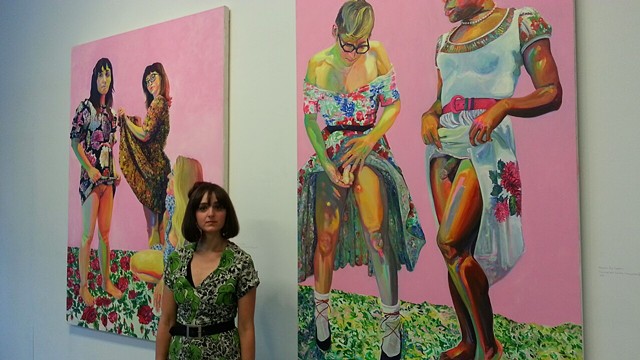 The paintings are experiential, psychological and inhabited by new feminist archetypes. The painted forms reveal themselves through heightened color, loose pattern, and uncouth texture. Organic shapes and tangled marks are executed with a loaded brush, allowing the figures to exist in a field of constant motion despite painting’s persistent stillness. From within these silent cacophonies I want the viewer to contemplate life, our histories, womanhood, desire, tension, friendship and love.

Recently I have been looking to ancient art to find powerful depictions of women. The anasyrma pose is the lifting of skirts and exposing of genitals. It is a form of exhibitionism but not for the purpose of sexual arousal- instead it is used as an apotropaic device, a gesture of power, healing and fructifying in both the physical and supernatural worlds. I have borrowed the pose as to rethink it in a contemporary context and emphasize the numinous qualities of the vulva and penis rather than as erotic or signifiers of gender. The figures in my paintings are often both feminine and masculine simultaneously. I find it necessary to paint these two qualities co-existing in a state of mutuality; overlapping, intersecting and dependent on one another.